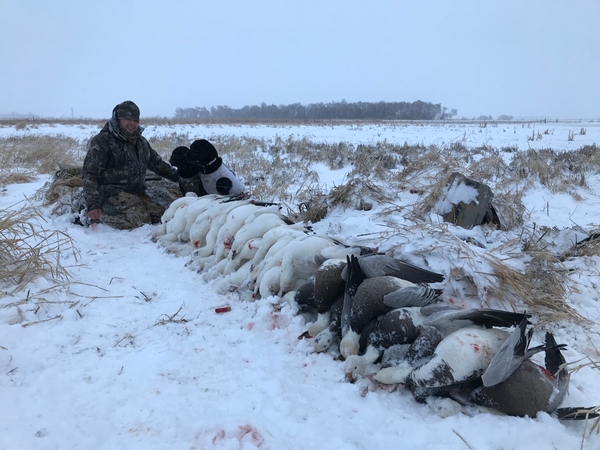 With high hopes and a large investment of decoys and gear I would head south to South Dakota to meet up with good friend Erik Kauffman where we would give spring snows a hard run.  I think we both found that we would find it to be a humbling experience where snow geese taught us a lesson that we weren't quite prepared for.  In ten days of hunting, we won two days of the battle, with both of these days being in full tilt snowstorms.  The remainder of the days, the geese won the battle where we struggled to decoy the amazingly smart goose.  With countless miles driven daily to come up with a shoot for the upcoming day, as well as a tough workout fighting mud, snow and placement of decoy after decoy, we both felt that to do this hunt again, one would need a 'troop' of guys to help with the daily grind.  In this one photo though, we both experienced our best ever snow goose shoot decoying bunch after bunch in a blizzard where we knocked out 68 birds in 30mph winds.  For a waterfowl hunter, you know what happens in a wind like that after the first shot.